Top-Paid Majors for the Class of 2013

—Technical majors head the list of highest-paid majors for the college Class of 2013, according to a new report by the National Association of Colleges and Employers (NACE).

In particular, NACE’s April 2013 Salary Survey—the first look at starting salaries for the Class of 2013—found that seven engineering majors are among the 10 top-paid for the college Class of 2013. (See Figure 1.)

“Engineering majors are consistently among the highest paid because the demand for them is so great,” says Marilyn Mackes, NACE executive director.

By far, petroleum engineering majors received the top starting salaries with an average of $93,500, nearly $22,000 more than the second highest-paid major, computer engineering at $71,700.

The top-paid non-engineering majors are computer science, with an average starting salary of $64,800, followed by management information systems/business ($63,100) and finance ($57,400).

An executive summary of the April 2013 Salary Survey report is available at www.naceweb.org/salary-survey-data/ .

NACE’s next report on starting salaries for Class of 2013 college graduates will be available in the September 2013 issue of Salary Survey. 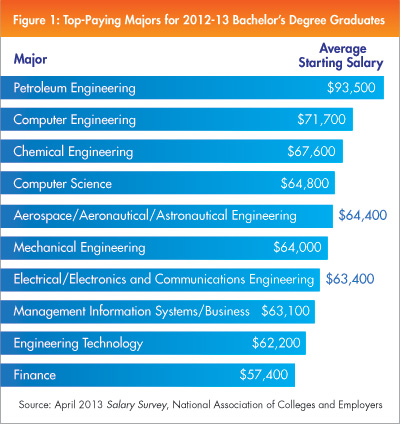 Salary Survey reports starting salaries for new college graduates in more than 90 disciplines at the bachelor’s-degree level. Data contained in the report are reported by employers, represent accepted starting salaries (not salary offers), and are produced through a compilation of data derived from the U.S. Bureau of Labor Statistics, the U.S. Census Bureau, and a master set of data developed by Job Search Intelligence. Data for the April 2013 report were retrieved in March 2013, and represent the first look at starting salaries for the college Class of 2013. Salary Survey is published in January, April, and September.

Since 1956, the National Association of Colleges and Employers (NACE) has been the leading source of information about the employment of college graduates. For more information, visit www.naceweb.org . NACE maintains a virtual press room for the media at www.naceweb.org/pressreleases/