Don’t Look for a Job You Love. Find One You Are Good At! 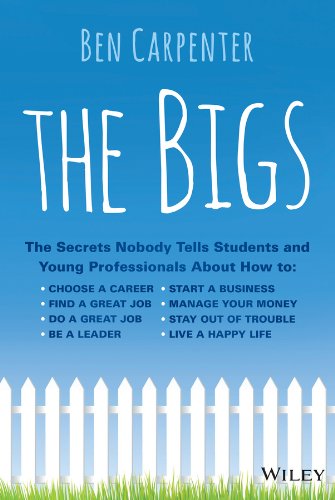 Do What You’re Good At, Not What You Love: Real Talk for Today’s Job Seekers

While “follow your passions” is popular career advice, it isn’t necessarily the best career advice. Ben Carpenter shares five compelling reasons why matching your job to your skill set, not your biggest passions, is a much better bet.

Hoboken, NJ (June 2014)—Much of the career advice that’s doled out these days encourages young people to “follow their dreams” and “feed their passion.” And sure, it sounds good. Who wouldn’t want to make money by doing a job that doesn’t really feel like “work”? Who wouldn’t want to turn a lifelong dream into a reality? But if you’re hoping (or holding out) for your dream job, Ben Carpenter is here with some tough love: What you’re good at should trump what you’re passionate about.

“Instead of asking yourself what you love to do, ask yourself what someone will be willing to hire you to do,” says Carpenter, author of the new book The Bigs: The Secrets Nobody Tells Students and Young Professionals About How to Find a Great Job, Do a Great Job, Start a Business, and Live a Happy Life (Wiley, April 2014, ISBN: 978-1-118-91702-2, $25.00). “In the real world, those two things are often very different.”

Carpenter feels that too many young people are unwittingly given bad advice by parents and teachers who naturally care about them and want them to be happy and fulfilled. But for a variety of reasons, he stresses, it’s best for job seekers to do plenty of research and ask themselves some hard questions: What are my talents and skills? What careers match up with them? In what fields might they be most in demand?

“I know it can be difficult to sacrifice your greatest passion for what’s actually viable in the cold light of day,” Carpenter says. “Though I started my career on Wall Street in sales, I always thought I would be a great trader. As it turned out, though, I just wasn’t suited for that particular niche. Sales was what I was good at, and once I realized that, I was able to be a true leader, which was the catalyst for my future promotions.”

“Sure, some people are lucky,” Carpenter continues. “Their passions align with what they’re good at and can still provide them with a living they can, well, live off of. But for many others, that won’t be the case. I recommend pursuing a career path that you’re reasonably sure will pay dividends, rather than placing a shaky bet on being able to beat the odds.”

If you’re not convinced, Carpenter offers five compelling reasons to focus, first and foremost, on using your skill set:

It’s easier to get a job.

It’s not exactly news that the current economy is as unforgiving as any in history. Still struggling to emerge from the long shadow of the Great Recession, today’s job market is incredibly tough and exhausting. In fact, around 40 percent of recent college graduates are underemployed. What that means, of course, is that most companies won’t be willing to go out on a limb for unproven job candidates. After all, they can have their pick of the most qualified free agents in the field!

“Often young job seekers decide to pursue ‘glamorous’ jobs in fields like entertainment, TV broadcasting, high-level PR, and more,” Carpenter acknowledges. “Sure, you might get a break, but the odds are most definitely against you. There’s usually a way to translate your skills into a more marketable career. As an example, if you’re persuasive and engaging, I’d advise you to put those skills to use in a career in sales, for instance, where it’s probably not as tough to get a job, rather than joining the ranks of struggling Broadway wannabes.”

Yes, Carpenter acknowledges that choosing a career you can do well, rather than one that seems fun and exciting, might sound unappealing. (Seriously, who believes that a job in sales is more fun than singing on a Broadway stage?) That’s why he challenges you to look at job-related concepts like “fulfilling” and “appealing” from a different angle.

“In the long run, the satisfaction you get from doing your job well will far outweigh how entertaining it is,” he confirms. “Even in the case of a field you truly love, a long string of disappointments and unmet goals will take a serious toll on your attitude, outlook, and even your fundamental well-being. On the flip side, though, years (and eventually decades) of success in a less-thrilling but steadier field will lead to many satisfying accomplishments and a legacy you’ll be proud of.”

Are you ready for some more tough love? Here goes: Odds are, you won’t be that one-in-a-million success story in the field you’re passionate about. You probably won’t get that cooking show you dreamed about. The book you wrote probably won’t become a runaway bestseller. What’s more, so-called “glamorous” jobs are notorious for being low-paying. You’ll end up working yourself to death and barely scraping by.

“If you pursue your passion, you might—might!—be able to make a decent living doing it,” Carpenter concedes. “But if you pursue what you’re good at, you’ll have much better odds of making a living. That’s because you’ll have more opportunities, and they’ll come to you more easily. The skills you have will help you do a great job, which will get the attention of your higher-ups, and as a result, you will be more likely to advance in your field.

“I probably don’t need to add that a bigger paycheck equals more freedom,” he says. “When you choose to work at what you’re good at, you have more time to play when the work day is done—and more disposable income to finance that play.”

It protects your passion.

Let’s say that you love to play golf and are (presumably) a good player—not good enough to compete on the PGA Tour, but enough to land a job as a golf pro at a country club. At first, you’re over the moon because you’re getting paid to do a job that revolves around your favorite pastime. But soon, your enthusiasm fades. Turns out, you spend 80 percent of your time in the pro shop selling shirts. And your time on the range mostly involves trying—yet again—to teach Mrs. Jones how to get the ball in the air. Before long, you actively dread going to work.

“Work is work,” Carpenter states. “No matter how ‘fun’ something might be, it loses a lot of its appeal when you have to do it 40 hours a week. Chances are, you won’t love that dream job half as much after you’ve been plugging away at it for a few years. And depending on the field, you might even be struggling financially for the ‘privilege’ of doing what has become drudgery. From personal experience, as well as from observing family, friends, and coworkers, I can state that most professionals are happiest doing what they are good at, while pursuing other passions—that their careers give them the means to finance—on the side.”

It prevents you from leaping before you look.

Let’s say that you’re one of the “lucky” ones and are offered a job in your dream field. So you don’t think twice before accepting an entry-level position at one of the hottest advertising agencies in town. I’ll get to test cool products, go to parties, meet all of the who’s who in the city, and so much more! you think. However, reality is much different. Six months in, you’re a ball of frazzled nerves because of the pressure put on you to be “creative” on a tight deadline. And, of course, it doesn’t help that you’re working long, unpredictable hours while being bullied by an unreasonable boss.

“‘Dream’ jobs often have hidden drawbacks to which your initial enthusiasm blinded you,” says Carpenter. “The very fact that you feel fortunate to be allowed ‘in’ makes it more likely that you’ll leap before you look. On the other hand, if your strategy is to match your skills to a job, you’ll probably put more thought and research into your search, and your perspective will be more balanced.”

“Remember, your overall guiding principle during a job search should be doing what you’re good at, not what you’re most passionate about,” Carpenter concludes. “Keep an open mind and remember that you don’t have to make your mark on the world in a dramatic way to still be successful.

“I promise you, if you build a firm professional foundation for yourself, you’ll still have room in your life for your passions—and you’ll also have the means and peace of mind you need to truly enjoy them,” he adds.

Ben Carpenter is author of The Bigs: The Secrets Nobody Tells Students and Young Professionals About How to Find a Great Job, Do a Great Job, Start a Business, and Live a Happy Life (Wiley, April 2014, ISBN: 978-1-118-91702-2, $25.00). He began his career as a commercial lending officer at the Bankers Trust Company. Two years later he joined Bankers Trust’s Primary Dealer selling U.S. Treasury bonds. After a brief stop at Morgan Stanley, Ben joined Greenwich Capital, which, during his 22-year career there, became one of the most respected and profitable firms on Wall Street. At Greenwich Capital, Ben was a salesman, trader, sales manager, co-chief operating officer, and co-CEO.

Currently Ben is the vice chairman of CRT Capital Group, a 300-person institutional broker-dealer located in Stamford, CT. He resides with his wife, Leigh, and three daughters in Greenwich, CT.

Check out additional free content including excerpts, videos, and blogs at www.thebigswebsite.com.