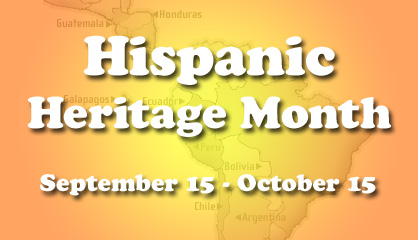 The U.S. has 52 million Hispanics and has the second largest Hispanic population behind Mexico.  The U.S. Census predicts that the Hispanic population will be 132 million by 2050.  Hispanic estimated purchasing power is $1.4 trillion since 2012.  Twenty five years ago, the U.S. chose to make a month long celebration of Hispanic contributions to the U.S. The celebration would be in conjunction with the anniversary of the independence of seven Latin American countries. Mexico, Costa Rica, Nicaragua, Honduras, Guatemala, Chile, and El Salvador all celebrate their independence during this this period.

The Pinta and Nina ships that sailed with Columbus were owned by the brothers Martin Alonso Pinzo and Vicente Anes Pinzo of Spain.  They both were captains of their respective ships during the voyage to what was thought to be the New World in 1492. Juan de la Cosa, also of Spain was the owner and captain of the final ship the Santa Maria that made the voyage. That was the beginning of many future Hispanic contributions to America.

Mexican-born Victor Ochoa patented the electric brake in 1907. Mexican engineer Guillermo Gonzalez Camarena received a patent for the color-wheel type of color television in 1942. Brazilian Roberto Landell de Moura received three patents between 1903 to 1904 for the hertzian wave transmitter, the wireless telephone and the wireless telegraph. Dr. Victor Blanco, PhD. an astronomer from Puerto Rico discovered the Galactic Cluster “Blanco 1” which was named after him.  Cuban doctor Carlos Finlay discovered that mosquitoes carried yellow fever in 1900.  Panamanian born Shoshana Johnson was the first Black/Hispanic female prisoner of war in the military history of the U.S. She was held captured in Iraq for 22 days.  She later received the Bronze Star and Purple Heart for her service in Iraq.

There are nine Hispanics in the Major League Baseball Hall of Fame.  There are eight Fortune 500 Hispanic CEOs.

Too often the thinking of Hispanic contribution is deeply rooted in food.  While the culture takes great pride in foods that represent their countries, the American psyche has to evolve from tacos, burritos, enchiladas, black beans and rice, plantains and Cuban sandwiches as the first layer of Hispanic contribution to this country. We mentioned some of the many contributions to America, there are many more.

Today, organizations like Circle La Luz are creating a network of mentoring Latinas all across the country. Circle La Luz is empowering young women’s transformation through scholarship funds and extensive mentoring so they can become the next contributors in their communities.

Hopefully, 25 years later a Hispanic Heritage Month will not be needed because Hispanic contributions will just be another great layer of the melting pot of America.